[Editor’s note: This is the full article referred to on page 3 of El Tecolote April/May 2016.]

The Tree Swallow is a cavity nester that naturally nests in tree cavities (often made by woodpeckers). Human development frequently removes many trees and those that remain are often groomed in a way that minimizes dead branches (most appropriate for cavity nests). Such habitat disturbance is the likely reason why tree swallows dropped to the status of being an uncommon breeder around Santa Barbara and Ventura.

Jan Wasserman was instrumental in reversing this in Ventura beginning in the l980’s and continuing into this century. Santa Barbara Audubon took inspiration from her efforts and began its own nest box program in 2005. Dave Eldridge and Don Schroeder were two of the people instrumental in developing the program that I inherited in July 2015 when I became the current Science Chair for the Santa Barbara Audubon Society. At that time there were 31 boxes; 11 at LLC (Lake Los Carneros) and 20 at COPR (Coal Oil Point Reserve).

In analyzing the previous four years of data, a number of fascinating facts and trends emerged. For instance, one-third of the boxes produce two-thirds (66%) of the successful fledges, and the lowest one-third of the boxes produce less than 5% of the fledges. Additionally, the number of successful fledges per year has been relatively flat over the past four years; and of total number of fledglings, 60% successfully fledge (i.e., there is a 40% mortality rate).

Because it would be extremely difficult to have one person per box, all day long, to see the fledglings emerge from the box and fly off, successful fledges are determined from observing the number of late-stage nestlings and then subtracting the number of dead (if any), once the time for fledging has passed. In principle, the boxes are monitored once each week; however, for various reasons, there have been gaps of three or four weeks between monitoring; resulting in too much uncertainty to specify the number of successful fledges. Consequently the number 205 successful fledges for the four years is a conservative one. There could be, perhaps 10% more. However, considering all of the other uncertainties associated with monitoring in the wild, the numbers are most likely a decent representation of reality.

In analyzing the data further, various factors were listed beside the individual boxes: whether the box had heat shielding (to keep it cooler inside), the distance to the next nearest box (tree swallows tend to defend a 100 ft. radius around their nest from other tree swallows), box type (several types were installed over the years), nearest vegetation over six feet tall (vegetation-loving house wrens will out-compete the tree swallow if it nests too close, as one example), distance to nearest water, etc.

From this and other analysis, only two trends had a strong correlation: 1) distance to the nearest vegetation over six feet tall, and 2) distance to fresh water (as opposed to brackish or salty water).
When one looks at the table above, first, LLC has significantly more successful fledges per box than COPR, and second, LLC is much more consistent year-after-year. The conclusion is that the lake is both more abundant and more constant in fresh water (and fresh water produced insects) than the fresh water coming into the Devereux Slough.

This year, a new box and box suspension system has been introduced that allows for some boxes to be instrumented (to measure temperature) and to make it faster and simpler for volunteers to monitor the boxes.With one exception, the best producing old boxes remain in their old location,

but retrofitted with the new suspension system. All of the low-producing, old boxes have been replaced with new boxes (some in new locations). In all, 19 new boxes were introduced for a new total of 14 boxes at LLC and 15 boxes at COPR-NE for a new total of 29 boxes for the tree swallow monitoring (three old boxes were left that have mostly been used by house wrens or blue birds, but will not be regularly monitored).

One of the on-going conversations is about the 40% mortality. One theory is that it may be due to the inside of the boxes getting too hot. An effective heat-shielding design was retrofitted on some of the boxes some years ago. In looking at the data, there seems to be no correlation between the heat-shielded boxes and mortality. Of the ten best producing boxes, only three have heat-shielding and the worst box for mortality is one that is heat-shielded. We hope to further investigate this issue this year by measuring the inside and outside-shaded temperatures every 15 minutes in a couple of representative boxes.

One alternative theory is that the number of fledges is food supply limited; i.e. the number of successful nests is at the limit of the number of available insects. Additionally, the majority of fatalities occur during the second nesting cycle (many of the tree swallows do two broods a nesting season). Thus, as the season progresses, getting hotter and drier, the number of insects decreases, allowing only the most efficient foragers to successfully complete this nesting cycle.

Another possibility has to do with the number of parasites becoming unbearable toward the end of the second nesting cycle. We have yet to come up with a methodology to test this (or rather, the time and energy).
The tree swallow nest box program depends mainly on UCSB student and recent graduates for volunteers; however the school year ends at the beginning of June and the nesting season typically goes into July. If some of the regular Audubon membership would like to participate in the monitoring during those last two months, you would be most welcome. 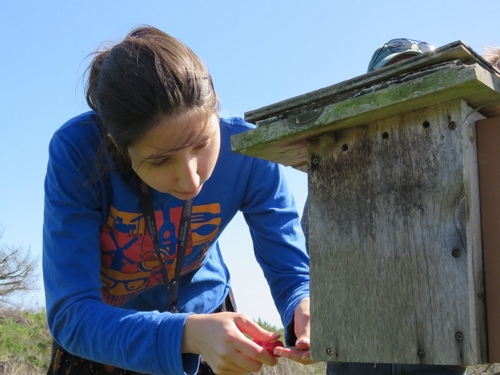 We can be contacted through: email hidden; JavaScript is required

If you would like to read more about the fascinating world of tree swallows, the following website is one excellent reference: http://www.treeswallowprojects.com